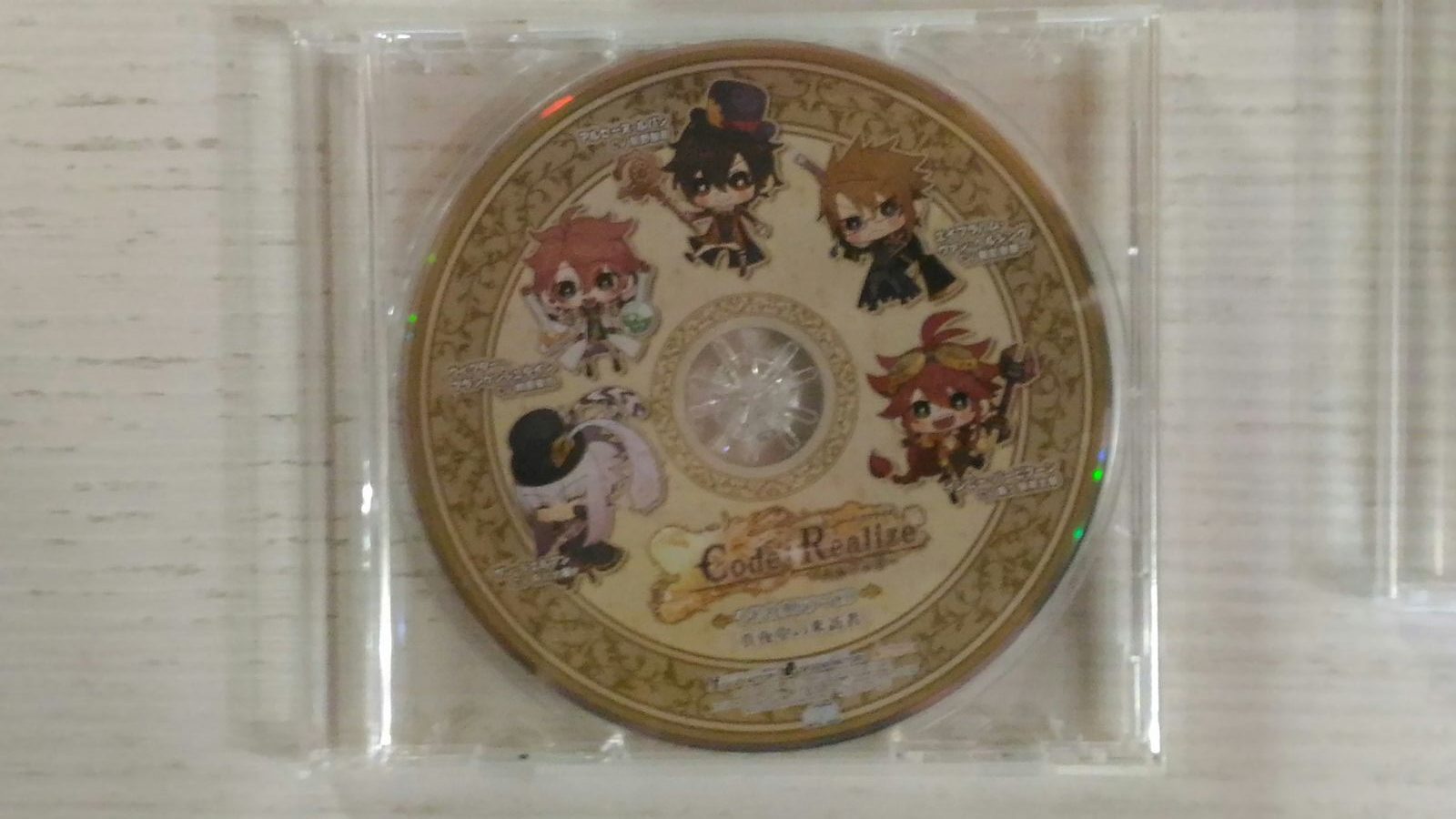 I’ve promised to review more drama cds in 2018 and here I am!

This time I’ll bring you a very popular title: Code realize Future blessings, the first fandisk of a series we all loved.

This is the drama CD which came with the preorder of the game, enjoy!

The story takes place at the usual mansion, where the boys and Cardia live.

Saint Germain is reading on the newspaper an article about a ghost, who seems to appear frequently in that period.

Impey complains: London is a place where technology and science keep evolving and spreading, how can people still believe in something so silly?

Saint calmly says he has seen one before, even if it’s not connected to these recent cases.

There are also different suspicious stories, where ghosts or something similar appeared.

Fran is really interested: he can’t deny the possibility of this kind of creatures, after all.

Lupin has been silent the whole time, which is weird; then he asks Saint if there are stories about ghosts who appeared in that mansion.

The Count just laughs: it’s a really old place, it wouldn’t be surprising.

Lupin admits he has noticed someone’s presence recently. He even tried to follow that “person”, but he disappeared. He didn’t seem a normal human.

Van says they have to do something just in case it was a dangerous creature, like bringing a silver knife. Impey makes fun of him: didn’t he say he doesn’t believe in ghosts? Or is he scared?

But he can’t even finish the sentence, before Van aims his gun at him.

Whatever it is, if someone has entered their mansion, they need to do something.

If it was Tasogare, aiming to kidnap Cardia…..

Impey panics. He’s not going to allow that, he’s her boyfriend after all!

Lupin asks him when did they become a couple, but Fran interrupts them: they have to plan carefully the vigilance, to catch the culprit.

At night, Van and Impey are on patron in the mansion together.

Suddenly, it becomes cold. They notice someone’s presence and start searching for him, but they can’t see anything: there’s fog everywhere and breathing becomes difficult too.

They run towards that direction, until they see in the dark something weird with sparkling eyes: is it really a ghost? Van prepares to shot.

Impey starts screaming: there’s something on his back!

He made a mistake with his experiments, causing fog to spread out of his room.

The case is solved. But later, they hear Lupin screaming outside.

Saint Germain talks to Cardia, who is going to sleep.

He doesn’t know if the ghost exists or if it’s scary, but there’s no reason to worry: everyone is going to come back safely, for sure. He’s going to check them out too, just in case.

It’s time to end this fuss.

Lupin is sure the culprit is not a ghost: he has a real body, no doubt about it. He touched him.

They have to find him before he becomes too dangerous and get rid of the problem.

They follow him everywhere, just making noise and destroying things along the way, but without being able to catch him: he’s fast and never gets tired.

In the end, when they are finally able to corner him and reveal his identity, they realize…………. they were just chasing Sissi! It wasn’t a ghost, he wasn’t an intruder, it’s just…. their dog!

They are all exhausted, while Saint just laughs softly: since they were all so busy lately, Sissi didn’t have enough time to play with them and was bored. It probably felt lonely.

Lupin apologizes and promises to play together more.

So, what did Lupin see that night, a few days before?

Wasn’t it an outsider’s presence? Was it Sissi? Or maybe, there’s really a ghost somewhere in the mansion………

Saint already told them his opinion: it wouldn’t be strange at all.

Everyone gets scared, they tell him to stop, but he just keeps laughing.