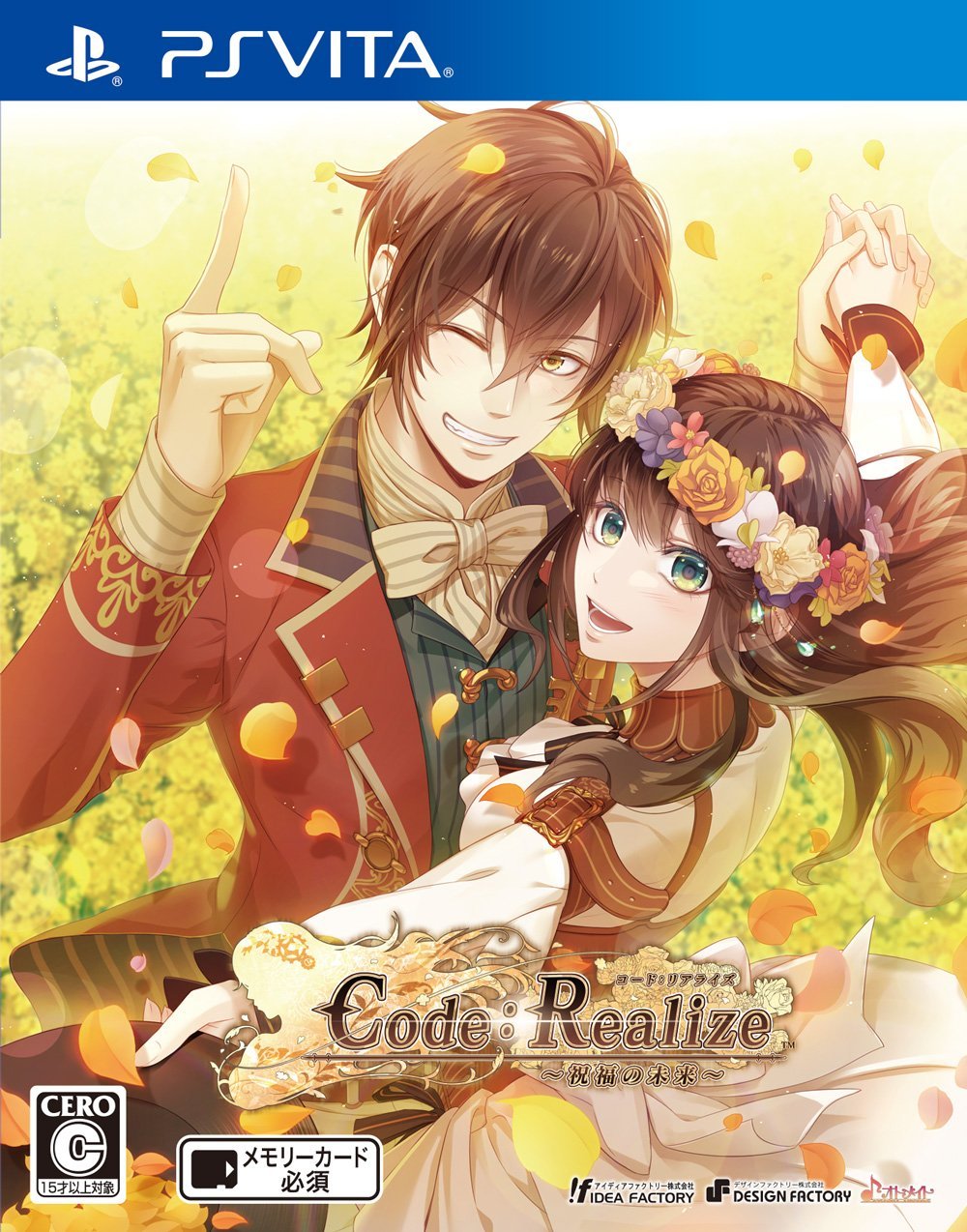 Despite loving Code:Realize so much, it took me almost an year until I finally played the FD…. embarrassing, I know.

After the release, I’ve read a few reviews, and I was disappointed: most of the people were complaining, so I decided to wait and give priority to other games.

In the end, when the anime started airing, I decided it was about time.

I’ve started with Fran first, because he’s probably my least favorite of the group and I wanted to get it done soon; well, what can I say… I regret not giving him a proper chance before this!

I absolutely loved his route, I wish it was longer! His relationship with Cardia was so sweet, they acted like a lovey-dovey couple from the start and my heart was melting.

Those flashbacks were really useful: I’ve played the first game a long time ago and I was worried I wouldn’t be able to remember everything. Thank you, writers, I really needed some help!

The ending is left quite open, I guess Otomate was already planning another FD, but I don’t complain: the final scene was perfect to me! there’s no need for a fancy white dress, to swear eternal love.

I’ve played Van Helsing next, and I didn’t know what to expect from him: will he act cold? Will he show his sweet side? Well… he sure changed a lot, but still, his route was emo as you could expect from him.

At first he was so cute, I loved his sweet smile and I hoped to see more lovely moments with Cardia. But then the unnecessary drama kicked in! He was sad and distant for literally no reason (please, don’t tell me it makes sense…..) but Impey and Dora chan (LOL) helped him to gain back some common sense and stop avoiding Cardia.

I enjoyed this route anyway, there were some romantic scenes and Van’s caring side was precious… but still, I wonder why Otomate decided to make everything complicated again. Stop the suffering when it’s not needed anymore, come on!

I have mixed feelings about Impey’s route.

Despite loving him a lot, I admit I was bored half of the time; sure, there are cute (and sexy) scenes too, but the overall plot was pretty basic and not even interesting.

It also seemed really short, it ended too quickly… something was lacking, but it’s not Impey’s fault, he’s adorable as usual! The wedding ending felt out of place and rushed: can’t we just see cute scenes of the couple being happy, since Cardia is finally free of the curse?

Of course not, we get that random final CG. I hope the 2nd FD makes up for it, he deserves more.

Saint Germain was my favorite character in the first game, so I was excited and worried at the same time: my expectations were really high, but I heard many people complained about it and I was sadly ready for a huge disappointment.

The truth is, I loved every single moment!

He used to act so cold and distant, but now he can finally open up and admit his insecurities; this new side of him made me so emotional, I was almost crying.

Behind his mask, he’s so fragile and afraid to be alone, he wants to be loved more than anything.

I confirm Saint Germain as my absolute best boy of this series, he’s also a great character in general for me, I can’t help but wanting to hug him and make him feel safe, I swear.

Lupin’s route, as usual, felt like the real ending.

His route started with an amazing sexy scene, then turned out to be really funny and cute.

In the end, it suddenly became very serious and emotional.

There’s no doubt, the writers once again worked really hard to make him look like perfect match for Cardia; they always put a lot of effort into his route to make it feel “complete”, as if only Lupin was created to fulfill our hopes and dreams.

I still enjoyed it a lot, but I can’t help but sigh at the overwhelming importance the writers always give to this character.

Finis’ route was great, it made me very emotional: he finally stopped being a puppet in Isaac’s hands and learned to value himself as a person.

I was so sad whenever he desperately tried to obtain his father’s approval, it broke mt heart; Cardia showed him the meaning of affection and made him feel loved for the first time in his life.

This is not a story about brotherly love, it’s most of all about self respect and personal growth: he truly became a human when he realized that he wanted to live and accepted help.

I could feel his pain when he cried for help, it was really touching.

I also appreciated the new character, Hansel: his sad past fit perfectly with the theme of the route, his role wasn’t forced at all.

I wish he had his own route, instead of that terrible disaster which was The Gang.

I’ll say it honestly: it was a waste of time.

I didn’t care at all about the new characters, I tried to pay attention but I was just bored to death.

Maybe I could have made it til the end, if it was 2 hours long (as the main character’s after stories), but it was a full route! I’ve played for about 3 hours, then I dropped it because it was just an agony for me. No regrets, since every review I’ve read complains about it, I’m sure I made a good choice.

Sholmes’ route was nice, I really liked him; it was well written, the plot was good, and his romantic moments with Cardia were cute. Watson was a good side character, I really wish for him to be happy (a future route, maybe?).

Sadly, I didn’t enjoy it as much as I should: if I had played it before The Gang, I’m sure I would have appreciated him a lot more; but that waste of time really drained my energy and my interest in the whole game was kinda low, from that moment.

I give you my advice: play The Gang last, so it won’t ruin you enjoyment for other routes.

Well, I think I wrote too much already!

Many people complained about this FD, but I don’t think it was that bad.

The main characters’ route were short, but I wasn’t disappointed; Finis had the best route, no doubts, it was really great; Sholmes was good too.

Let’s pretend The Gang never happened, just thinking about it makes me angry.

Since it’s going to be localized soon, I hope a lot of people will enjoy it!