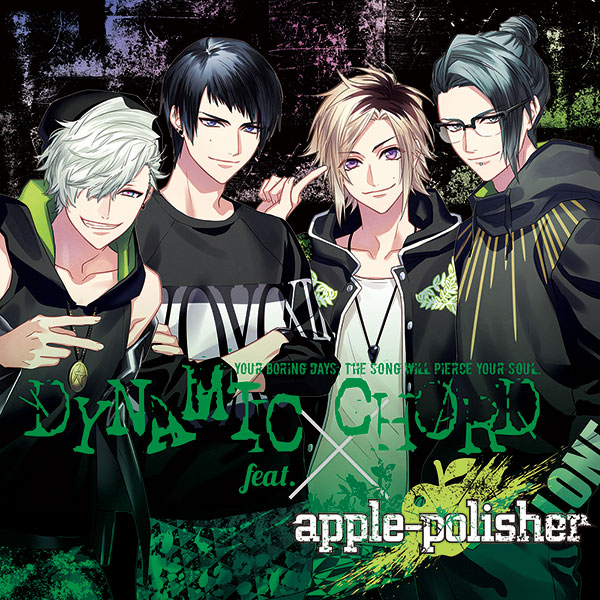 I have a love/hate relationship with the Dynamic Chord series (maybe more hate tbh), but I’ve decided to play Apple polisher anyway, before the anime started.

I won’t lie, I did it just for Narumi, since he also appeared in the Reve parfait game: he was so cute and I felt sorry for him when he was brutally friend-zoned by his first love, so I wanted to finally see him happy.

His route should be canon, since the heroine decided to became a singer just for him and his love for the music. Could he replace his childhood first love, with another childhood friend? Of course, not so easily.

I was expecting some angst, but…. this route was just weird and the poor heroine looked like a desperate most of the time.

I don’t get why everyone in the band spoiled Narumi so much and treated him like a child who lives in a happy fairy-tale world… even his friends hid their problems and kept pretending everything was fine, while in fact everything was falling to pieces.

Narumi’s route felt like a long common route, since most of the time it was about band member’s problems, instead of revolving around the couple’s relationship.

I’ve seen him grow as a character, but the writing was terrible for the romantic part: the whole situation was just weird and felt too unreal.

Can you imagine being in love with a boy since childhood, confessing your feelings, getting rejected, still choosing to stay close to him as a friend, finally being confessed, then rejecting him because you realize he’s just pitying you, and then become a couple? Is this a stupid shoujo setting? These kind of plots are the reason why I stopped reading manga, but Narumi’s family really looks like it comes straight out from a stereotypical shoujo.

Also, is there someone who feels attracted by a guy who keeps crying? Because he literally cried for everything and it was a huge turn off for me; I appreciate boys who are not afraid to show their weaknesses, but it happened too often and I couldn’t even seem him as a man honestly.

The contrast between this route’s annoying innocence and the others felt like a punch in my chest.

Shinobu’s route was very different from my expectations.

I thought he was difficult to understand and get close to, but he was in fact a sweet guy, perfect boyfriend material. He’s just… too serious? But it didn’t bother me, when he opened up a bit he was always nice and caring, it was worth the effort.

I laughed so much when he was drunk and didn’t have his glasses on, he couldn’t see anything and became so embarrassing and awkward!

His relationship with the heroine grew up very naturally from co-workers, friends, close friends, to lovers and this made it pleasing to play.

I only have one complain: in the special section, there’s an extra scene where the heroine asks Shinobu to call her by her first name. It could be really cute, if…… he actually SAID her name! What’s the point of creating a scene like that, if the seiyuu just says “….” instead of pronouncing her name? It’s really awkward, I don’t get this choice: every otome game character now says clearly the heroine’s name, if you don’t change it. But Honeybee black decided that we prefer to self insert completely, I guess.

Yuki interested me and also quite worried me at the same time, before I entered his route.

He looked like the typical Dynamic chord’s playboy character who rapes the heroine without caring, because he’s used to treat women like that.

I was surprised to see that he actually had a soft side and behind his mask he hid a caring personality; I admit I slowly fell in love with him, just as the heroine did.

His devotion for the band and his love for music was really admirable, even if it went too far.

I can’t blame him completely, I thought the heroine was really too naive at some point; but maybe, I’m just too indulgent with Yuki, I can’t bring myself to hate him.

My favorite ending was the saddest one tho, am I a bad person? I mean, I saw them having sex so many times, that sexy moments in the happy endings didn’t interest me at all.

The bad one was really unexpected and interesting… it took me a while to fully understand what was going on, after 4 years, and it was probably the moment when I was mostly interested.

It was a great idea, I loved it!

I swear I can’t even think of a better word, just thinking about him makes me irritated.

I’ve started hating him in the common route, but I hoped he would eventually improve his attitude while entering his own route; well, NOPE.

After a few minutes, I already wanted to drop and never complete the game, because I could predict easily what was going to happen.

He kept getting angry at the poor heroine, he raised his voice, he insulted her, abused her… but she kept staying on his side, as if she had to save him at all costs; I understand, he was ill, she wanted him to cure himself… but still, I couldn’t pity him. He was disrespecting everyone, being childish and selfish.

His “sad past” didn’t justify his actions, it just made him creepier.

The only ending I liked, which kept me hooked, was the bad one… wow, it was really sad, but amazing at the same time; I think it’s the best and more realistic conclusion for a character like him, who basically wants to self destroy himself and drag someone with him from the start.

Is it just me, or this game was really long? Like, it took me more than one month for each route!

I play slowly on pc, but still…

I’ve tried to take notes of the time necessary to complete Yuusei’s route, and it was about 14 hours. Maybe they’re not even so many, but to me it felt like ages, I’m not kidding.

I guess there’s no need to explain further why I didn’t enjoy this game, so I’ll just talk about the Dynamic chord series in general.

Honeybee black had an interesting idea, but also very risky: instead of going for happy and sparkly idols, they chose to portray the life and struggles of rock bands.

The concept was great to me, I love realistic and dark games, and seeing a “music” game which showed freely sexy scenes and believable adult situations attracted me a lot.

Reve parfait were very good, their stories were angsty but still interesting; I still consider it the best game of the whole series, I enjoyed it a lot.

Liar-s were a huge mistake: psychological and physical abuse were difficult to handle and the heroine who just blamed herself was irritating, I was tempted to ragequit multiple times.

Kyhoso were more decent, but still the heroine being so naive and taking all the abuse was painful to see… and I was getting really tired of rape and bitches tropes, justified only by sad childhood (which were too tragic to be taken seriously, how can I believe that any of the member had some kind of terrible childhood trauma? Come on!).

Apple Polisher was better from this point of view, but the game itself had terrible writing most of the time; I still don’t get why there were so many useless college scenes, or family situations with Narumi’s parents acting like teenagers, which were just ridiculous.

Honestly, I think Honey black started this series with an interesting concept, but they ran out of idea pretty fast and just relied on the good art and music to keep people interested.

I guess it works on many people, but it’s not enough to me…. it took me 3 months to complete this game, because I honestly didn’t care about any of the members and I could already predict everything right from the start, since they kept recycling the same pattern over and over.

I forced myself to complete it because it’s the last, and I used to like Narumi when he was a side character in the first game, but it turned out to be a huge disappointment.

I can’t recommend this series, but if you want to try…….. prepare for the worst, you’ve been warned.