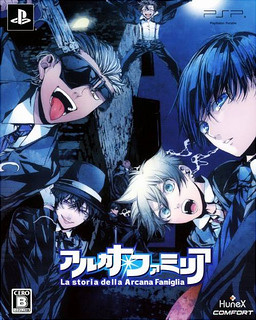 La storia della Arcana Famiglia has been in my backlog from ages, since I’ve seen the anime about 7 years ago, and the (italian) setting got my interest immediately; but somehow, my lack of romantic attraction for individual characters and the weird art style pulled me off for a long, long time.

But finally, the time to play it has come!

Let’s talk a bit about the overall plot: the heroine is called Felicità and she’s the only daughter of Mondo, who is in control of the organization which rules over Regalo.

Since Mondo is getting older, he decided to retire and give all his powers to the person who proves to be the strongest, fighting with their special superpowers (named after Tarot cards).

The winner will also marry Felicità, so she’s allowed to participate to the tournament and choose to be free, if she wins.

But before you get into fights, you can spend a lot of time with those boys, and I swear they are really funny! Most of the time, it seems more a comedy game than an otome.

Judging from the anime, my favorite was probably Debito; but I’m also weak to butlers, as you probably know, so I decided to start my journey with Luca.

It was a good choice.

Luca has been close to Felicità since her childhood, since he was assigned as her guardian from her very early days, even if he’s like 10 years older than her.

They lived separated from everyone else, as a family of three, with Mamma.

Their relationship was kinda ambiguous, since they obviously cared for each other a lot, but it wasn’t clear if they just loved each other as siblings, or something more romantic.

Their love confession happened at the very, very end, after the final duel, so it’s still difficult to me, to imagine them as a real couple; I hope the fandisk or the sequel will make up for this.

Libertà was a nice boy, very positive despite his difficult childhood and always ready to help his “father” Dante. Everything was fine, until I knew the truth about his parents.

I’m a person who doesn’t care much about incest or disturbing stuff in otoge, but the fact that no one cared about it the slightest, felt really weird: if this revelation had him doubt about his relationship and future with Felicità, I would probably be the one who tells him to follow his feelings anyway; but seeing how it felt normal and nobody cared, was really annoying and ruined my experience.

I was looking forward to Debito as the most interesting guy, his flirty attitude is my style!

But sadly, this game is really innocent and based mostly on friendship, so his sexiness couldn’t shine as he deserves: there were just a couple good scenes, but the game focused more of his hate towards Jolly. Well, everyone hates Jolly in this game. I hope a fandisk will give him more space to show his personality!

Nova was probably the nicest surprise: I wasn’t interested in a little brat with a tsundere attitude, but I ended up thinking that his blushing face was so cute, I couldn’t resist!

I can’t consider him as a love interest, but Felicità is really young too, so they are a good couple; for me, he’s more a cute little brother.

Jolly is the complete opposite problem: he’s way too old (I guess at least 45? maybe even 50?) and also creepy. He keeps hiding in his laboratory, making experiments even on children.

What a good husband candidate, for a 16 years old!

I understand that he’s still good looking and his mysterious attitude can be appealing, but… the age gap honestly made me uncomfortable, I can’t really understand how her father agreed to this.

Well, that’s the reason why I avoided Dante’s route like the black plague, I liked him as a father figure for Libertà and that’s how I want to consider him. Seeing him flirt with Felicità is going to ruin forever my image of him, I don’t need it thanks.

I tried to enjoy Jolly’s route without thinking about Felicità, he’s attractive enough for me and he looks 35 or 40, but there’s an ending when he said: “Luca, since I’m marrying Felicità soon, you should call her mother from now on” and I lost it at that point, I was completely disgusted.

A 29 years old who has a 16 years old step mother is too much, I really can’t take this.

I left Pace last to relieve my soul, since he’s usually happy, sweet and funny.

He says multiple times that his happiness comes from helping others and seeing their smiling faces, that’s why he keeps using his strength to protect the family and innocent people in the city.

Despite my admiration for his amazing personality, I couldn’t really consider him boyfriend material, but mostly a brother or a good friend: you know, sadly I’m mostly into bad guys, somehow I end up friendzoning the sweet ones. His obsession for lasagna had a part in this, too.

Surprisingly, his route ended up being quite serious and sad in the end, which left me a bittersweet taste, so maybe I wouldn’t recommend to follow my playorder.

But every character has some problem for different reasons, so it’s hard for me to give you good advice, it depends on what bothers you the most.

So, would I recommend this?

Overall the game is funny, I liked the characters and their interactions, I felt like I was part of that family; but it feels like the writers had weird kinks and I don’t get why they were all included in a CeroB game which is actually really innocent. I can ignore the incest, since I enjoy the onii san trope, so I can pass on Nova being Felicità’s cousin; Libertà’s situation creeped me more, he’s Mondo’s grandson, which makes Felicità his aunt. But I could stand this, somehow I could.

Debito, Luca and Pace are way too old for a 16 years old, but they are still in their 20’s so it’s ok, I can stand this too.

But Jolly is Luca’s father, which makes him at least 45 years old, who thought it was legal and legit for him to marry a 16 years girl?! How could Mondo allow this?! It disgusted me so much, I decided to avoid completely Dante’s route, I couldn’t stand this anymore.

What’s up with the writer’s mind?! A few changes could have improved at least a bit this disgusting scenario, come on! First of all, Felicità should have been at least 18, that would have saved completely Debito, Luca and Pace. Let’s forget about Nova, let’s pretend it’s ok.

But what’s the point of Libertà’s incest relationship? He could have been just a childhood friend, or maybe Dante’s real son! Oh, of course Dante should not be playable, I can’t save his route in any way. And Jolly…… I don’t know, but at least make him 35 years old? It’s not necessary for him to be Luca’s father! There’s still a huge age gap, but if the heroine is at least 18, I can accept it.

I really think the writer loved those kinks and somehow he was allowed to put every perversion he/she had into this (apparently very innocent) game.

I really can’t tell why it went like this, it’s a pity since it was enjoyable, but those revelations ruined it all, in every single route. I guess they wanted a shocking factor? It worked, no doubt.

So, if you still want to play this game, keep in mind that it’s not innocent as it seems.