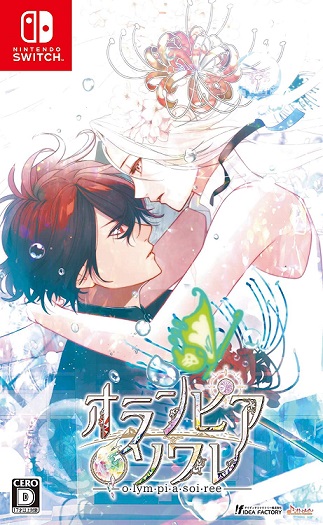 Olympia Soiree has been really hyped even before the release, probably because of the beautiful Satoi’s art and the interesting setting.

From the start, I had a feeling that Otomate put a lot of effort in this game, since the fantasy world built by the writers is shown and described in detail, which makes the immersion in this setting really deep and emotionally investing.

Even if the plot could seem basic at a first glance (the heroine has basically to find an husband once she turns 18, to have immediately children), it’s the organization of that island, that makes everything original and serious: since their birth, people are divided into groups based on “colors”, which have a different status in the society. It’s basically a caste system, with all the discrimination and implications you can imagine.

The heroine is mostly called Olympia, but her real name is Byakuya; she’s the only “white” left, with the power of saving the sun when it disappears. It’s necessary for the country, that she gives birth to other “whites”, before she dies and her color disappears completely.

So, her quest for the perfect husband starts!

Starting with Rikuu is the best, so I went for his route first despite having a bad impression, after meeting him a couple of times: his obsession for the purity of his Blue color kinda unnerved me, also he looked like a kuudere so no thanks.

I was really glad to discover that he’s actually a tsundere with no experience at all with women, since he can’t have a girlfriend and marry before he turns 30; he’s just awkward and easily embarrassed, which is a trope I always appreciate.

When he started melting I fell for him completely, he’s so precious, it’s impossible not to love him!

It’s a great start of the game, I highly suggest you to choose Rikuu first, too.

I went for Tokisada next.

Usually I’m not into shotas, so I wasn’t excited to consider him my future husband, but I admit I’m weak when they call me onee-san; you know, I’m kinda easy to please.

I was happily surprised when he had the guts to propose himself as an husband candidate, he was straightforward and that attitude always gets my respect. I like boys who come to me like: “give me a chance, I’m sure I’m the one for you”, I think they deserve at least a date.

Even if they are younger, confidence is the key.

Falling in love with his sweetness was easy, I think it was a perfect match for Olympia and her innocence. Wait, while we’re at it, let me spend my 2 cents for her.

Byakuya was a great heroine, given her situation and the misogyny that surrounds her since birth: her role in the world is to have children, she’s continuously reminded of that, but she also has a strong individuality and beliefs.

She hates discrimination and she actively helps people in difficult situations, while helping them communicate through letters. Also, despite her pureness, she takes the lead many times in the relationship, she doesn’t wait passively for the boy to take the first move on her.

Of course, she can’t change that system alone, we can’t expect her to make a revolution; but she tries, despite being born privileged, to help others without judging.

Sorry for this digression, we were talking about Tokisada, so let’s wrap it up: sweet person, cute interactions, great couple. Approved.

Kuroba was completely another story.

He’s a doctor, outgoing and flirty, always smiling and positive, even if his color is one of the most hated, the Black. Olympia fell for him really soon, I guess it was love at first sight, since she started with the typical “what is this feeling?” immediately when you enter his route.

I can’t blame her, Kuroba’s personality is really attractive, he’s confident and gentle.

At least, so he seems: I’ve learned a long time ago that games with a CeroD rating can hide something terrible of any kind, I can’t even fully trust main characters, let alone side characters.

This route had a very disturbing scene that came almost unexpected, I was very anxious for the poor Olympia; well, I’ve seen terrible stuff in years of gaming, nothing really shocks me anymore, but it was really something.

Overall it was a great route, even if it was very different from my expectations and somehow I couldn’t fall in love with Kuroba as I expected to.

Yosuga looks very suspicious from the very first moment you meet him: his attitude gave the the vibes of a manwhore, or at least a person who enjoys manipulating innocent girls like Olympia; even if I’m attracted to him, he’s not remotely the type I’d choose as a husband, if I were her.

But I was wrong, SO WRONG!

Yosuga is really sweet, he carries a painful burden and I was happy to finally see him relieved, leading an happy life. He went through so much, poor guy.

I started Himuka’s route very excitedly, since he was the character who looked the most interesting to me, when I first started playing.

He’s so shy and sensitive, my heart was breaking every time he referred of himself as an awful and dirty creature who would ruin Olympia’s purity.

This route unveils very important stuff, there’s no wonder it’s locked; some scenes were sad, I even thought I made a wrong choice, since the happy ending was tragic at some point, I was almost crying! But it was totally worth it, I loved it.

The main boy of the game is Akaza, whose route unlocks last: he’s highly respected for his status and job; his beautiful red eyes and red hair make him a great candidate as Olympia’s husband.

I didn’t like his attitude that much at first, because he coldly offered “to fulfill his duty” marrying the heroine, if she wasn’t able to find a man on her own, which is not exactly a romantic proposal.

But I admit it, I fell in love on the first date. His attitude changes completely, he becomes very charming, how can someone resist? I gave up immediately.

I can’t say more, his route was basically a massive spoiler, so I’ll just say how much I loved every single moment.

Would I recommend Olympia soiree?

This game had everything I could ask for: a great setting, a well written plot, interesting characters (I loved them all, which is rare), shady villains, angst, romance and even an emotional ending.

Separating from them will be hard, but I hope there’s still some chance for a fandisk, I’m not ready to end this story. Needless to say, I consider this one of the best games I’ve ever played; I’m even seriously thinking about putting it in my TOP10 favorite games of all times. I’ll think about it.