I’ve always wanted to add mobage reviews to my blog, but as you probably know, I only play on console or PC. That’s why I’ve asked my dear friend Miriam to write something for me!

She enjoys mobage, but she doesn’t have a blog, so she was kind enough to share her opinion here.

This is her very first review, for Twisted Wonderland!

You can follow her on twitter, @Tamaki_anis. Please be kind with her…. I hope she’ll collaborate with me again very soon! 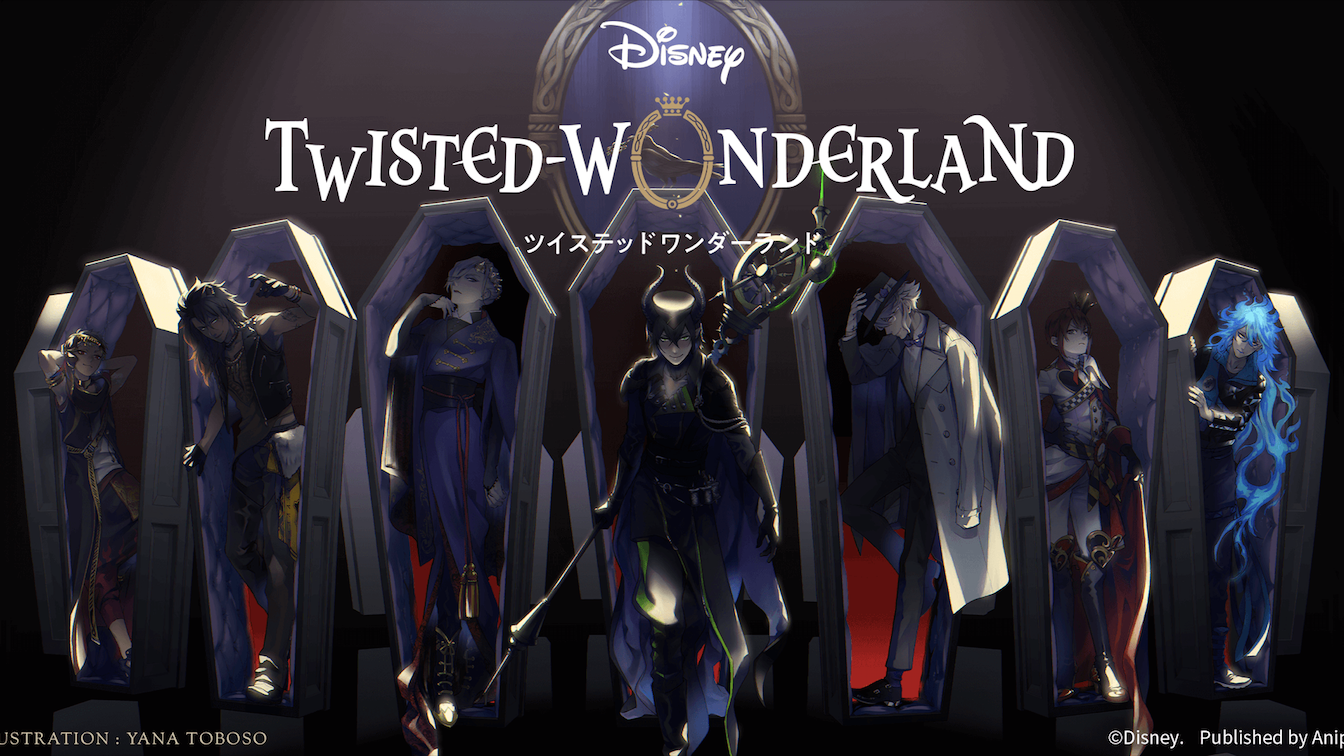 Some of you may have heard of “Twisted Wonderland”. It’s a Japanese mobile game created by Disney and Aniplex and was released on March 18 2020, almost one year ago.

The first things that will catch your eye are the characters. The artist credited for the character designs (but also the concept and scenario) is none other than Yana Toboso, the creator of Black Butler/Kuroshitsuji! I don’t know how many of you know about it, but you can surely expect beautiful and stunning art.

The main characters and their dorms are based on particular Disney villains and movies. There are seven dorms, can you guess which Disney movies inspire them? I know this one is easy, but the same can’t be said for the characters, don’t worry I won’t spoil the fun, so you can try to guess yourself when you see them!

Let’s talk about the gameplay. First of all, Twisted Wonderland isn’t an otome game, it’s an adventure game with rhythm game elements. So there is the story mode that is basically a fully voiced visual novel, also the characters move when they talk! There is the battle part where you have to defeat the enemies with your characters cards, each enemy has a different type (water, fire, wind exc…) so make sure to use the right cards to win, and then there is the rhythm part where you have to tap the notes in rhythm with the music. Speaking of which, the music in this game is wonderful and really catchy! I recommend at least listening to the opening song, it’s beautiful and the video is in anime style!

Like any other mobile game, there’s the gacha section where you can summon the banners’ characters cards and every now and then there are events with limited stories and cards.

You can let your characters join classes (Magic History, Alchemy and Fly), doing so will increase their stats and abilities,

I assure you the gameplay isn’t as complicated as it sounds!

You can actually enjoy the story even if you don’t know Japanese, there are plenty of translations around.

I’m sure at this point you may have noticed I didn’t talk about the plot. Believe me, I didn’t forget about it! The story starts when the main character gets summoned by the magic mirror to the Night Raven College, a magic training school. That’s where the mc meets the other characters and where their adventure starts! I don’t want to spoil anything else, so that you can enjoy the story to the fullest when and if you’ll decide to play the game!

I think I can tell you who my favorite characters are: Vil and Malleus! I wonder if you’ll find out why I like them so much? I’m also curious to know which characters will steal your heart!

So what will you do? Will you give a chance to Twisted Wonderland and fall in love with the story and the characters as I did?