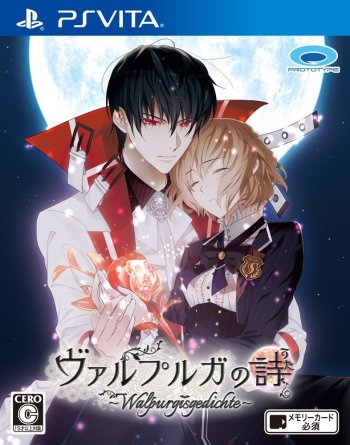 Since my psvita backlog is apparently neverending, here we are talking about an old otome game which almost everyone ignored, Walpurgis no uta.

The overall concept is not original: it’s about sexy vampires sucking blood and childhood promises, basically; anyway, I was still able to enjoy it, so let’s talk briefly about the main guys.

The heroine, Shio, is a second-year high school student, who lives with her older brother; as typical in otome games, anime, manga and whatever involves young guys, their mother works a lot and she’s never really at home.

Dating oniichan is something I always wish for, so I obviously started with his route.

Suou is a doctor who calls his little sister “princess”; since childhood, his health was very weak, so he couldn’t fulfill his wish to protect Shio as he wanted.

Like every typical oniichan in otome games, suddenly his personality changes and he goes from sweet and caring to full yandere mode, locking her inside the house and forcing his feelings despite the sense of guilt. Well, it’s not a surprise anymore.

After oniichan, I went for the wolves-brothers.

Ryuumaru pretends he doesn’t care about the heroine, while always blurting out his sarcastic remarks, but he’s actually very sweet; he feels sick after using his healing powers, that’s why he thinks he’s weaker compared to his older brother.

I loved his route, he acts cold, but he’s very sensitive: he’s scared to be left out and he has a brother complex, which is really sad; I guess having a stronger twin is not easy.

He’s cool, confident, destined to be the new leader; but after knowing the truth about Ryuumaru, it was hard to choose the older brother, I felt a bit guilty.

I highly suggest you to go for Tora first and Ryuu next, it’s way more enjoyable.

The main character of the game is a vampire, who uses the name Shiga Takashi at school.

He met the heroine when she was a kid and decided that she had to be his wife, even if she forgot everything about their first meeting; he has no knowledge of human feelings, he’s scary and rude from time to time. But sucking blood is always attractive for otome game heroines and Shio is not different: she was supposed to run away and ask for help to the wolves, but in this route she randomly decided that becoming a vampire was cooler; I can’t even blame her completely.

Anyway, I grew to like him because I’m weak to pale boys who can play piano.

So, would I recommend Walpurgis no Uta?

First of all, it was visually better than I expected: there are a lot of CGs, some of them are even animated (like tears flowing on Shio’s cheeks, that was nice).

The plot is nothing special, but still entertaining, so I never got bored; the twins’ routes had too much copy pasta probably, but they are nice guys so I can’t complain much.

I think the best playorder is oniichan -Tora – Ryuu , leaving poster boys last: when you know the truth, you’ll probably end up pitying him and it becomes difficult to consider him the villain, in other routes.

The BGM is surprisingly good, I appreciated it a lot, it reminded me of Rejet good old times.

I don’t know why everyone ignored this game, probably because it’s not from Otomate, but I can’t say it’s bad: it’s just mediocre, if you find a good deal it can still be enjoyable.

I wouldn’t recommend it of course, but I don’t consider this a kusoge at all.