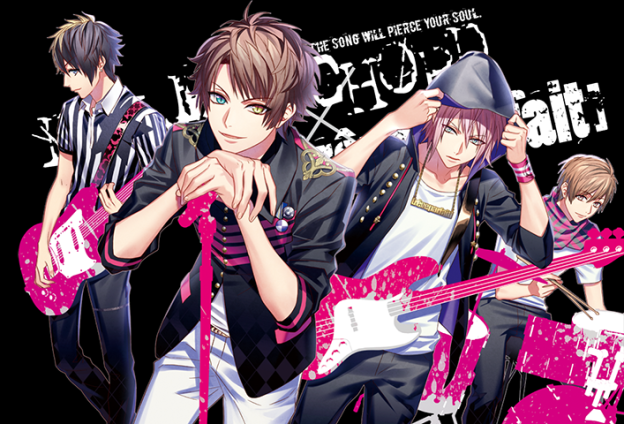 Dynamic chord Reve parfait was the first game released by honeybee black, and I was really curious to see if this new company could bring us something different from their main branch. Obviously, I already knew honeybee, because of the widely famous Starry sky (who hasn’t played at least one of them?), so in my mind they had an image of sweet and innocent otoge developers, maybe even childish.

When I knew the game was about a band, I imagined it as a rockish version of utapri, but still colorful and funny. I was basically waiting to see good looking young boys making music together, having a good time improving, becoming more and more friends; I could already imagine them talking about their dreams, laughing, and growing up while falling in love…. well, I was wrong.

This game is completely different from every other honeybee release, and also the situations are way more mature than every music game I’ve played before this.

The common route was quite long, but never boring; it never felt like wasting time with useless filler scenes before entering the individual route, but it had an interesting yet simple plot.

What I appreciated the most, was the realism of the characters: somehow, it feels nice to me seeing that they are popular at school, and have groupies and girlfriends. I’m very tired of the concept of good looking yet too pure boys, who are loved by every girl around but aren’t interested in any of them and prefer to be alone. Which real high schooler would act like that? Let them be boys, come on! We all have been at school, and we know how it goes: the popular boys get the girls. End of the story. That’s why I really enjoyed to see those kind of scenes, they felt real; some were a bit shocking at first, because I wasn’t expecting it, but it was a really nice choice.

Unfortunately, the heroine couldn’t keep up at all with the boys: unsure of her looks, always shy, she couldn’t even react to the bullies. She even thought she deserved to be bullied somehow, like “I’m not pretty enough to stand next to these ikemens, I know it!” and it made me cringe.

I’ve played Kuon first. Most of his route was about his crazy ex girlfriend, and trust me, she was really really annoying; her voice, her face…. I just wished I could punch her or at least insult her, but obviously the heroine apologized instead. Every time she said “I can’t live without Kuon”, I was answering “then you can throw yourself under a train, goodbye!”, but it wasn’t an option. Who made the choices for this game?! Anyway, once he finally got rid of her, the route became great again, and I loved it. The secret scenario was awesome! Also, the ending were really good tbh.

I was hoping for something even better while playing Tsumugi, but I was a bit disappointed: he looked like a playboy in the common, yet his route felt quite innocent. I don’t know why, but he suddenly became shy and it seemed quite forced to me, as if the writer decided to add randomly some romanticism in the game at the end.

Reon was the last I played, and I was expecting something really interesting: he’s the heroine’s ex boyfriend, so I spent most of the game wondering why they broke up. I was hoping to unveil a shocking reason behind that, but it was just a typical childish misunderstanding, which became worse because of his tsundere attitude, so it wasn’t that great. There’s also another crazy girl in his route, and I really couldn’t take anymore these crazy bitches! Get out of my otoge please! Anyway, this route was quite good too.

None of the characters really stood out to me, but I enjoyed every route equally.

It was quite short, actually I hoped to play more! A new game which would allow me to play also the drummer, was released after this… but I didn’t bother honestly. Aki was nice, but not worth the price of another game for me.

Anyway, my first experience with honeybee black ended with a good feeling, that’s why I decided to try also another Dynamic chord, featuring Liar-s. I plan to play them all actually, but time WHERE?! But don’t worry, I will.

The question, as always, is: do I recommend this game?

This is not perfect, but still very enjoyable, and I liked all the characters; also, the art is colorful and nice. The opening song was really amazing, I still listen to it often, I never get tired! I like this kind of sounds more than the typical idol songs. If you like music themes, and you are a bit tired of too innocent otoge, then try Dynamic chord. You won’t be disappointed!